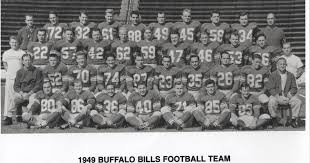 The Bills of a Bygone Era

After their playoff loss to the Cleveland Browns, the Bills players walked into the locker room, a team not only defeated on the field physically, but emotionally as well. They sat in the locker room, trying to comprehend the loss and what it would take to defeat the Cleveland Browns. They had come so close to playing for a championship, only to see themselves come up just short. The Bills managed to become one of the best teams in the league, only to fall, as many other teams had, to a Browns team that was coached by one of the best, and quarterbacked by one of the best young stars in the league. If silence could be deafening, this would be one of those times. As the Bills coach thought about the words, he was going to use to console his players, he was very much aware of the elephant in the room. He knew, as the players knew, they might have very well played their last game representing the city of Buffalo, as the future of pro football in Western New York was very much in doubt.

No, we’re not talking about the 1989 Bills that lost to the Cleveland Browns after Ronnie Harmon’s inexplicable drop of a sure touchdown pass. This Buffalo Bills team played their final pro football game 40 years prior. This Buffalo Bills team was part of the All-American Football Conference, a league that challenged the National Football League Post World War II. And the Cleveland Browns team they’d lost to was perhaps the most dominate team in the history of the sport. They were so dominate that they were the league champions every year of the AAFC’s existence. So, dominate they crushed the Philadelphia Eagles in the NFL debut. And while the Browns, lead by head coach Paul Brown and quarterback Otto Graham, were shocking the experts and rolling over the NFL teams that were supposed to expose the Browns as a big fish in a small pond, the Buffalo Bills had faded into history. Just another small market team in a league the NFL had absorbed. And in the blink of an eye, it was all over.

The first incarnation of the Buffalo Bills started life as the Buffalo Bisons, a terrible football squad that floundered to a 3-10-1 team in 1946. A name change and seriously needed upgrade in talent, saw the newly christened Buffalo Bills finish second in their division with an 8-4-2 record. Led by quarterback George Ratterman, the Bills crushed teams like the New York Yankees, Brooklyn Dodgers and Chicago Rockets. They swept the series game the Los Angeles Dons and Baltimore Colts. However, The Yankees won the division and the Bills finished second at a time in pro football were finishing second did not buy you a ticket to the play offs.

The next season, with Ratterman under center and star running back Chet Mutryn, the Bills finished tied with the Baltimore Colts with a 7-7 record, but won the division, and beat the Colts in the Eastern Division championship game. The joy of victory was short lived as the Red Dawson coached Bills were crushed by the powerhouse Browns 49-7 in the league championship game. The only Bills score was a touchdown pass from second string quarterback Jim Still to receiver Al Baldwin. One of the true ironic moments, the icing on the cake came when Browns cornerback Lou Saban returned a Jim Still interception 39 yards for a touchdown for the final score of the game. And if that name sounds familiar, it should. That Lou Saban would go on to be the same Lou Saban that would lead the Buffalo Bills to glory in the American Football League.

In 1949, the Bills got off to a sluggish start and Red Dawson was replaced by Clem Crowe. The team finished 5-5-2 and once again lost to the Cleveland Browns in the play offs. The highlight of thew season was that it was the Bills in the opening week that snapped the Browns undefeated streak but playing them to a tie. By this time many other teams in the league, like the Colts and Hornets were cash strapped and the Dodgers and Yankees franchises merged together. While the Browns dominance was great for the city, it spelled doom for the rest of the league. It was soon announced that the AAFC would be absorbed into the NFL, but not all teams were going to survive.

Given the fact they were one of the league’s most promising teams, drew well at the gate and were well-supported, the perception was that the Buffalo Bills were going to be one of the teams to merge into the NFL. However, two owners, Dan Reeves of the Los Angeles Rams and George Halas of the Chicago Bears. Reeves had a bizarre concern of scheduling issues as to why he voted against the entry of the Bills. Halas had a long-standing grudge dating back 1921. The Buffalo All-Americans were the league champions and played the Chicago Staleys (the precursor to the Bears) in what was supposed to be a post season exhibition game. The Staleys won and Halas successfully petitioned the league to award the championship to Chicago. This would go on to be known in western New York football lore as the “Staley Swindle”

The decision to accept the Baltimore Colts and not the Buffalo Bills backfired. The Colts, who were in dire financial straits, folded after just one season, despite having Y.A. Tittle, one of the greatest to ever play the game, under center. Pat McGroder, a local Buffalo businessman, sought to land an expansion team to Buffalo. He hoped to parlay the AFL’s interest in the city as a way to get the NFL to grant the city a franchise, but the NFL showed zero interest and Ralph Wilson, who tried to land an AFL franchise in Miami, accepted a bid to bring the AFL to Buffalo, and McGroder took a position with the modern Bills franchise. McGroder had received an offer from the American Association, but the thought of going from a league that was a rival to the NFL, to playing in an under funded minor league was not an appealing one.

And all of this leads one to wonder. What would have happened if the NFL accepted the Bills into the league. Would the franchise have survived in the small market? Would pro football even exist today in western New York? Or would the Browns/Bills rivalry have translated into the NFL. While it is fun to ponder every single one of these questions, all said and done, losing out on entry to the NFL worked out well for the city. The Buffalo Bills that took the field in the American Football League turned out to be one of the flagship teams in the league, even winning a league championship and had the Super Bowl come around just one year prior, it could have been the Bills taking on Lombardi’s Packers in Super Bowl I. It is fun to look back at this sadly forgotten era of pro football in Western New York and wonder what might have been.