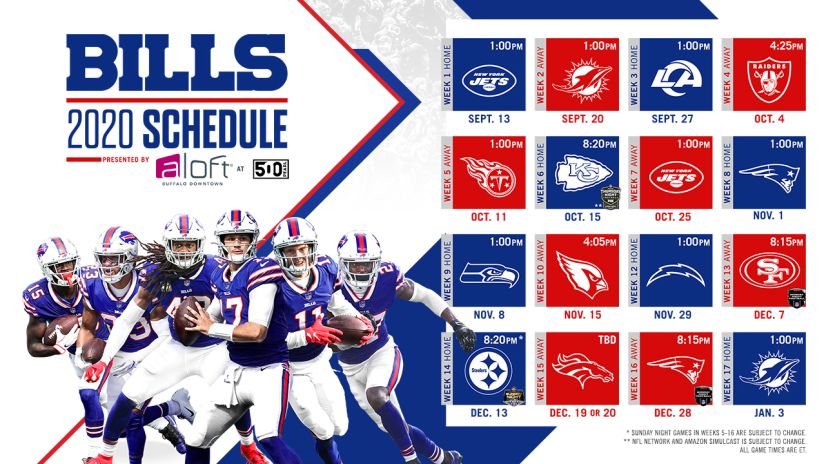 For the first time since 2000, the Buffalo Bills will play multiple prime time games! There are four on the schedule. Two Monday night games on the road including at NFC Champion, San Francisco and week 16 division tilt at New England, sans Tom Brady. If fans are allowed to attend games then Week 6, October 15th, a Thursday night home game against the defending Super Bowl Champion Chiefs will be off the page. The BILLS will also get a Sunday Night Football rematch with the Pittsburgh Steelers, but this time it will be in Orchard Park.

The three games not played on Sunday are a franchise first. Other quirks to this schedule include a TBD game at Denver as well as playing the division in pairs. Weeks 1-2, 7-8 and 16-17 are the divisional weeks for the BILLS. The Bye Week is Week 11 (November 22nd) which is late compared to recent years.

Last year, I picked the BILLS to go 11-5 and make the playoffs. They finished 10-6. Before the release of the actual schedule, I had the BILLS 13-3 and winning the AFC East. Let’s see if that prediction holds up now that we have the dates and times!

Week 1: Home vs. Jets 1:00– An opening day rematch with the BILLS hosting the Jets this time. Last season the BILLS came back from a 16-0 deficit to defeat the Jets in New Jersey. Manish Mheta of the New York Daily News reported this on Twitter earlier today and I was quite skeptical because the rumor was that the league was going to schedule all non conference opponents for the first four weeks in case of having to cancel due to the Coronavirus. That made sense to me and the rumor was that the BILLS were hosting Seattle at 4:25 to be in the FOX Game of the Week Slot. Although that is not happening, this works out fine. Jets fans have pointed out that Darnold is 2-0 in Buffalo but fail to remember that last year’s Week 17 match-up saw the BILLS treat it as a preseason game and the Jets squeaked by with a 13-6 win. Both teams have made some upgrades but this BILLS defense at home will be too tough to score on. BILLS take this relatively easily and start 1-0.

Week 2: @ Miami 1:00– The BILLS will get an early look at the possible new look Dolphins. Either its Ryan Fitzpatrick or its the rookie Tua. Either way its a BILLS win and they are 2-0 and 2-0 in the division to start the season.

Week 3: Home vs. LA Rams 1:00– Sean McVay and his Rams travel east for an early start. The Rams regressed last season and I expect that regression to continue. Barring injuries this BILLS defense should be humming. Another relatively easy win for the BILLS and they are 3-0 for the second straight season.

Week 4: @ LV Raiders 4:25– The first ever trip to Vegas and its a 4:25 game. This could be Nantz and Romo on the call. The Raiders are weird. They seemed to channel Al Davis in the Draft picking the speedster, Henry Ruggs III instead of Cee Dee Lamb in the first round. This game will completely rely on Derek Carr. If he is on, it could be a long day for the BILLS. If he’s off then its another victory. I will say he’s off and the BILLS are 4-0 but in what could be a very nip and tuck game.

Week 5: @ Tennessee 1:00– A rematch from last season. A very ugly game that saw the Duke Williams coming out party and one of the last appearances for Marcus Mariota as the BILLS sneaked out a 14-7 win. Keep in mind they held Derrick Henry to 74 yards rushing in that game. A lot of people think it would have been different had Ryan Tannehill been the starter. The key here is what the BILLS did to Henry and that would have negated Tannehill. Same thing happens here in another ugly game but the BILLS win it and are 5-0.

Week 6: Thursday Night Football vs. Kansas City 8:25– Prime time in Orchard Park is going to be rocking! It is going to be loud and intense! Unfortunately though, Mahomes has too much fire power and the Chiefs pull away late. BILLS are 5-1.

Week 7: @ Jets 1:00– A 10 day break is needed for the BILLS as they go down to Jersey to play the Jets. The Jets are improved but I just don’t believe in Adam Gase and I haven’t seen consistency out of Sam Darnold yet. I really feel that the BILLS can sweep the division this year and this game will be closer than Week 1 but the BILLS still win it with a late field goal. BILLS are 6-1.

Week 8: Home vs. New England 1:00– For the first time in 20 years, Tom Brady does NOT come to Buffalo! The wildcard is whether or not the Patriots make a late offseason change of heart and sign Cam Newton. Lets say they don’t and the BILLS will get a great victory over a nemesis to go to 7-1.

Week 9: Home vs. Seattle 1:00– Russell Wilson comes to town and that means all of the heroics that go with being one of the best road game quarterbacks or recent time. The BILLS keep this close but Wilson breaks our hearts and the BILLS drop to 7-2.

Week 10: @ Arizona 4:05– When we knew the opponents right after the season, I had this penciled as a win. Now with the addition of DeAndre Hopkins and Kyler Murray getting a season under his belt, this game becomes very daunting. One advantage the BILLS will have is the crowd. Lots of snowbirds and transplants from Western, NY so this will look a lot like the Titans game from last year. They will need it. The sky will be falling for the first time this season as the BILLS will lose back-to-back games and go into the bye at 7-3.

Week 12: Home vs. LA Chargers 1:00-Justin Herbert is most likely the starter coming into this one for LA. He has some good weapons but Defensive Coordinator Leslie Frazier has shown to get more aggressive against rookies so expect that here. It will be tough for the Chargers to get out of the gate in which could be a rebuilding year for them. BILLS pull away, end the losing streak and are 8-3. We are all breathing easy again.

Week 13: Monday Night Football @ San Francisco 8:15– The first of two Monday Night games for the BILLS and it comes at the defending NFC Champions. This could be a slugfest. Both of these teams have fantastic defenses. I’ll give the 49ERS the three point home field advantage and say they win this one. Two great defenses, makes me hope the injuries are minimal in this one. BILLS are 8-4.

Week 14: Sunday Night Football Home vs. Pittsburgh 8:20– In a Sunday Night Football Rematch that saw the BILLS clinch a playoff spot with two weeks to go in the season, the BILLS host the Steelers. At 8-4 the stadium will be rocking again and “Big Ben” has always struggled on the road. This BILLS defense is for real folks. BILLS handles business at home and are 9-4.

Week 15: @ Denver TBD– This is a flex date on the schedule. Either Saturday the 19th or Sunday the 20th. Either way, most likely a 4:05 start for the BILLS. Drew Lock most likely starting for the Broncos. I’m just not impressed with this lineup or Vic Fangio as a Head Coach. BILLS keep humming and are 10-4 Good Buddy!

Week 16: Monday Night Football @ New England 8:15– By this time in the season we will know if Belechick is a coaching genius, been hiding behind a phenomenal quarterback or is tanking for Trevor Lawrence. Even if the Pats are in the hunt for a wildcard spot, I just think this BILLS team is the complete package this year. They finish the sweep and the BILLS win it and improve to 11-4.

Week 17: Home vs. Miami 1:00– Depending on the BILLS seed will depend on how long starters will play. For the sake of making a definitive pick, I say McDermott plays it straight. BILLS sweep the division and finish 12-4 and we get ready for the BILLS first home playoff game in 25 years!

They will only go 1-3 against the NFC West but that means an 11-1 conference record which could be important especially if battling Baltimore for the second seed in the conference.

There you have it folks! Two straight years in the playoffs and a division title to boot! Not too shabby!

Make sure you join me every Sunday night at 9:30 for the Weekly Meeting Videocast on our Facebook Page!